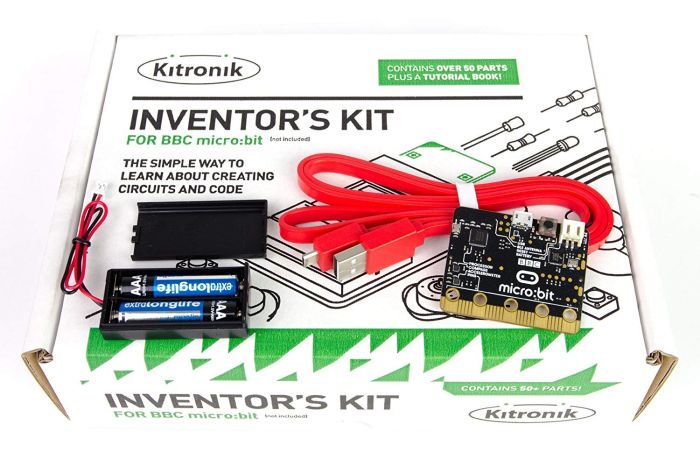 Product Description
The Kitronik Inventor's Kit for the BBC micro:bit is a great way to get started with programming and hardware interaction with the BBC micro:bit. This Inventor's Kit contains everything you need to complete 10 experiments including using LEDs, motors, LDRs and capacitors.
To get you off to a flying start, we have included an easy to follow tutorial book which guides you through everything you will need to know about programming the BBC micro:bit. You don't need any experience with programming as the tutorial book will guide you every step of the way. You'll be programming and creating circuits in no time!
The Kitronik Inventor's Kit for the BBC micro:bit provides a fantastic way of learning how to construct and control electronic circuits. The BBC micro:bit has a selection of pins that are located on the bottom edge of its PCB (see datasheet below for details). By using our specially designed Edge Connector Board for the BBC micro:bit in conjunction with the breadboard (see below), it is easy to use these pins to connect additional components to the BBC micro:bit.
The BBC micro:bit is a powerful handheld, fully programmable, computer designed by the BBC and a number of partners to encourage children to get actively involved in writing software and building new things that will be controlled by it. Write your code using one of the easy to use editors provided on the BBC micro:bit website, connect your BBC micro:bit to your computer via USB press the compile button in the editor and then drop the downloaded file directly onto your BBC micro:bit. There is also an app for Android devices.
Wirelessly connect and interact with the world around you. Use Bluetooth Low Energy to connect to mobile phones and tablets, take a selfie or drive the music in your playlists.
The BBC micro:bit is the spiritual successor of the BBC Micro of the 1980s, which itself introduced a generation of children to computing. The BBC micro:bit carries on this 30 year tradition and does it 18 times faster and is 70 times smaller than its predecessor.
Based around a 32 bit ARM Cortex-M0 processor, the BBC micro:bit also features on board accelerometer and compass sensors, Bluetooth Low Energy and USB connectivity, a display consisting of 25 LEDs, two programmable buttons and it can be powered by either USB or an external battery pack. The device inputs and outputs are through five ring connectors that are part of the 21-pin edge connector.
Note: The Inventors Kit for the BBC micro:bit requires assembly.
Features
BBC micro:bit Features: